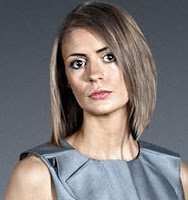 Stacey Collins
So it’s Wednesday again and tonight’s episode of The Apprentice, ‘Fashion’, is only a few hour-glass figures away. With the women contestants outnumbering the male contestants even after Melissa’s dramatic departure last week, we are left wondering who will prevail tonight.

The biggest loser of episode four was Melissa Cohen who was sent home by Lord Sugar because of her inability to listen to fellow potential apprentices and possible buyers in the pitches.

Perhaps more interesting last week was watching how our old favourite to win Stella English has fallen out of the limelight into the shadows of her fellow contestants. There is the possibility that Stella is being stealthy, treading carefully so as not to upset potential team leaders. However, her inconsistency and inability to listen to simple instructions regarding selling prices, could be her downfall.

The real winner of last weeks episode was Investment Banker Liz Locke whose successful pitches managed to bring in a total of £122,625 for the team Apollo.

Although Liz spoke confidently in the pitches, we have to wonder whether it was down to her ability that the Baby Glow product lit up the faces of potential buyers or whether it was because the much sought after product was a winning creation.

We have noticed that the general trend is that the women contestants appear to flourish when placed in groups of men. Should Stella’s success in week two and Liz’s luck in week four be accredited to their male team mates?

All reports on The Apprentice
on Wednesday, November 03, 2010

Email ThisBlogThis!Share to TwitterShare to FacebookShare to Pinterest
See more on: Liz Locke, Selling To Trade, The Apprentice

I think the teams do work better when they are mixed up in terms of gender. The girls just don't seem to get on this year and I think it causes distractions from their tasks.

Totally astonished that Paloma went!! Thought she had a lot of potential - so did Nick Hewer, as I'm watching You're Fired!

We all may be missing the story here as Liz Locke led the winning team. It must make her favourite - but I dunno how she's doing it. Any ideas Stacey?