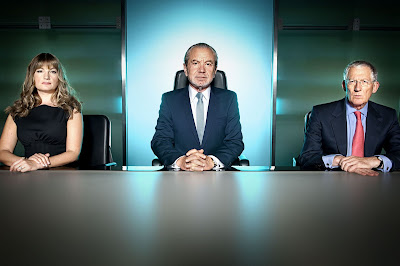 Stacey Collins
Week five of The Apprentice, ‘Fashion’, seemed eerily absent of bitchiness and narcissism…that is until Paloma Vivanco took it solely upon herself to rectify this unusual peaceful phase.

Following on from last week's Apprentice article, perhaps the even mix of male and female contestants in the teams Apollo and Synergy was the cause of the somewhat serene surrender between team mates last week.

Despite the obvious friction between Paloma and Alex Epstein, both teams seemed to relish the fashion task which saw them sell upcoming London fashion designer’s clothing at the Trafford Centre in Manchester.

It seems apparent from last weeks episode that if Stella English fails to make an impression on Lord Sugar, her intent is to substitute her dreams of becoming a successful business women for a career in modelling as she was seen showcasing the designers clothes in the shop window. Has this second time round of modelling in The Apprentice for Stella ruined her credibility and given her the title of ‘parading monkey’ or is she showing the viewers that she has that ‘likeability factor’?

Whether it was down to Stella’s exhibiting of the clothes, or team leader, Liz Locke, Synergy took the victory for the fashion task with total sales of £3760.37 which left Paloma’s team Apollo facing Lord Sugar in the boardroom.

Paloma put 100 per cent blame of the failure of the task on Alex, saying his mistake with the promotions spot and obsession with the layout of the shop cost them the victory.

Albeit rather satisfying when Paloma’s last attempt at saving herself with her egotistic comments actually resulted in her talking herself out of the competition, you have to wonder whether the entertaining Paloma palaver will be severely missed. No wonder readers of this site have narrowly agreed to back Sir Alan - and decree that Paloma should be fired!

The question is who to watch now? Can Liz really take credit for her team's win or is there a new potential winner that will emerge. Keep tuned to find out.
on Wednesday, November 10, 2010

Time for a bloke to go this week. I vote Alex!

Laura, are you The Laura? She seems well anti-Alex.

It won't be Alex. The other pitch is so bad.

Alex in the board room. I should be a betting person! Laura

It could be Laura.

I think she's talking herself into the boardroom.