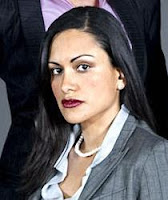 Stacey Collins
Oh, look. It’s that time of the week again; The Apprentice time. Tonight’s episode, ‘Selling to Trade’ will see the remaining contestants select two, new innovative products to trade to the country’s largest retailers. However, task aside, most of the country will be watching to see what degree of bitchiness this week’s episode will entail.
Every week of The Apprentice seems to reveal
to its watchers a new villainess to which last week’s episode, ‘Bakery’, was no exception. Senior Marketing Manager Paloma Vivanco was portrayed as week three’s ruthless rogue.

Whereas week two’s episode saw Stella English dominate and take control of the male team, week three’s team leader to Synergy, Melissa Cohen was a weak substitute. Melissa flustered about with figures, floundered in the pitch’s and failed to make an impact on her fellow team mates often relying on others to make the decisions for her. 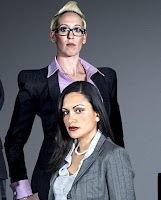 Ultimately, it was Paloma Vivanco from the team Apollo that stood out from the female contestants last week. Paloma transformed from angel (Shibby’s angel to be precise) to hellish team mate, falling swiftly from grace by calling Shibby a ‘joke’ in the boardroom.

Paloma may have also lost some followers when she denied in the boardroom that she had said that Sandeesh Samra hadn’t pulled her weight for the task. Maybe she forgot that she was being filmed at the time she said it.

Tonight’s Apprentice is also looking to be an explosive episode with tension running high between Paloma and Laura Moore. To watch, tune in to BBC1 at 9pm tonight.

It would appear that the singer Paloma Faith shares more than a first name with week three’s villainess; the title of her song ‘Play On’ seems to be moral incentive that Ms Vivanco lives by.
Tweet Stacey about this
Earlier article on The Apprentice
on Wednesday, October 27, 2010

Well I thought Paloma was pretty good last week. Great negotiating skills and let down by the doctor.

A new star tonight: Liz Locke! Whatever happened to Stella?