Will it be a Liz v Stella face-off? 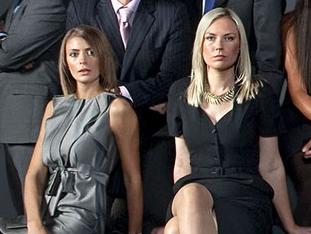 After last week’s episode, we at Women’s News have adopted the stance that we don’t mind who wins The Apprentice, as long as it isn’t 21 year old Stuart Baggs ‘The Brand’. Give us back Paloma Vivanco any day.

The candidates' task last week was to give the public a chance to be in their own short blue-screened movie.

Stuart was team leader for the group Apollo that was formed by Joanna Riley, Stella English and Laura Moore. Whilst Stuart was successful at keeping the girls from squabbling and bitching between themselves, his rather dictatorial approach to leadership was not favoured by his team or Lord Sugar’s sidekick Nick Hewer who thought him to be irritating.

However it was Synergy, led by Sandeesh Samra, who faced Lord Sugar in the boardroom as the losing team. Whether it was her mistake in thinking Pinewood Studios was a furniture store, the hour late opening of their stand or the four pound price slash of their DVD’s, Lord Sugar sent Sandeesh packing.

That leaves four female and four male contestants left in the running to achieve the ultimate apprentice job and we’re debating whether to put a bet on an all women’s final.

Although we envision a Laura-free final, Joanna impressed us in last weeks episode ‘DVD’ and we also saw a flash of Stella’s former fiery self as she defended her meticulous note taking argued against Stuart in the boardroom. We believe that Stella’s real competition is likeable Liz Locke who used her initiative in last week’s episode to follow Apollo’s car idea.

So will you be rushing down to the local bookies to place your bets on an all women finale or do you think the men will keep the women reined in and secure a spot in Lord Sugar’s ultimate line up?
on Tuesday, November 23, 2010

Yes I think there's a lot of Stella we're still not seeing. A real disappointment if it doesn't end as a Liz v Stella face-off.

Stella leading a team again - this will make or break her. You may be in luck, Stacey. Could well be Stuart - a very sneaky attitude.

Getting the impression that Stella is mopping up here. There must be a catch.

Heaps of praise for Stella and Jo. Not gonna be Stuart - sorry Stacey.