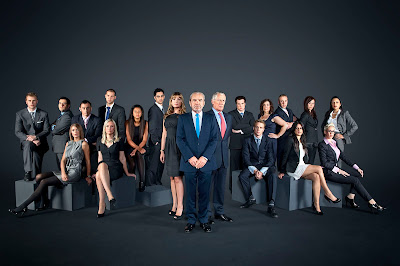 Stacey Collins
Last week's episode of The Apprentice, ‘Advertising’, led us to say au revoir to Apollo leader, Alex Epstein. Not much of a loss there although I was hoping that it would be serious Sandeesh that would be scrubbed out after week six’s cleaning advert task.

The team Apollo came up with a Dennis the Menace, red and black style container for their e-coli banishing cleaner ‘Germinator’ which was described as being better sold in a car accessory department. Synergy’s end product ‘Octi-Kleen’ wasn’t much better either. When discussing their TV advert, team leader Chris remarked that sex sells although I’m not sure an actress in a comical octopus costume could be described as sexy.

We were surprised that Stella English didn’t give a hand and offer to model the eight-legged octopus outfit to further her back-up modelling career.

In fact, Stella didn’t offer much at all to week six ‘Advertising’. We believe she has the potential as we have already seen but she appears to have taken a back seat recently. Is her successfulness in staying out of the firing line accountable to the people she has been grouped with?

It is interesting to note the group dynamics now the female contestants have been split between both groups. Whilst Stella, Liz and Joanne managed to peacefully work together, there was some animosity regarding the pitch between Apollo girls, Laura and Sandeesh.


And so my prediction for tomorrow’s episode, 'DVD'? I believe Laura will be mov-ied out of the boardroom by Lord Alan Sugar. Watch The Apprentice tomorrow on BBC One at 9pm to find out whether the prediction is correct.
on Tuesday, November 16, 2010

Email ThisBlogThis!Share to TwitterShare to FacebookShare to Pinterest
See more on: DVD, stacey collins, The Apprentice

I think Sandeesh could be going tonight.

I agree. She is now the weakest link!

Laura and Sandeesh distinguish themselves (not) in the first minute.

I'm having doubts. I think she'll have trouble beating Stuart to the boardroom!

Stacey, not following your tips in future! Janet, well done! Poor Sandeesh is on her way out.

Liz in the boardroom.