Does Lady Gaga represent Lady Global in the 21st century? 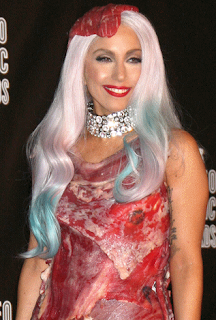 Stacey Collins
In a hundred years time when the world has succumbed to artificial intelligence and robots are used to enforce a totalitarian government, what will the 21st century be most remembered for?

Although we are only ten years in, the war on terrorism, the Banksy phenomena, mainstream multiculturalism, the rise of the social network in our digital age, growing globalisation, the emphasis and acceptance of sexuality with the abolishing of the ‘Don’t ask, don’t tell’ rule are already trending topics across the globe.

Our love and obsession with the celebrity, whether they be reality or actually talented, has also dominated the first decade of the 21st Century. Stars such as Barack Obama, Marc Jacobs and Lady Gaga epitomise individuality and a time of change- ideas promoted in the last ten years.

Lady Gaga in particular has been known as a 21st century icon. At just 24 years old, Lady Gaga has metamorphosed, shedding her given name of Stefani Joanne Angelina Germanotta and has earned the status as Artist of the Year 2010 from Billboard and named by Time 100 list as one of the most influential people in the world.

So if she is a signifier for the former part of the 21st century, does this also mean that she represents the women of this period?

Whilst many of us would initially refuse to be linked to the meat-wearing, teacup holding, emancipated cultural phenomenon accused of having links with the Illuminati, her desire to make a difference through her advocacy of charity and gay rights is commendable. She has revolutionised pop music and her postmodern themes have contributed towards this success.

The 21st Century woman could be described as an emerging power, detached from the stereotypical ancient history role in order to be independent, reaching higher social status by being able to balance family with friends and career.

Surely being awarded the title of seventh most powerful woman in the world by Forbes constitutes Lady Gaga as a self-sufficient 21st century woman with some of the above traits? She isn’t in the kitchen cooking the meat and washing up the teacup - she is wearing it as a statement, emphasising that women are capable of almost anything.

So does Lady Gaga embody the 21st century woman? In her extremity as a wayward ‘singer of the outcasts’, and supposed hermaphrodite who has pushed the boundaries of originality to the maximum, I would suggest that she doesn’t. However, her confidence, her promotion of equality, her yearning for individuality and stubbornness against conformity could be said to reflect the characteristics and ideals of the 21st century woman.

Right, I’m off to the local butchers with my needle and thread.
on Wednesday, January 19, 2011