The future of sleep 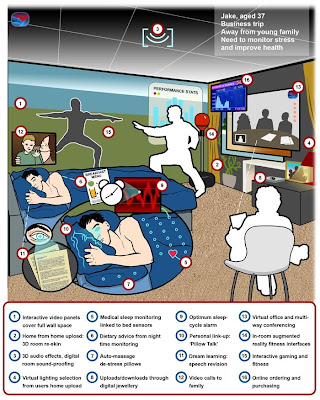 Ever get that feeling of dissatisfaction three seconds after you wake up from a dream and realise you haven’t just bought Jimmy Choos and are not actually fluent in Spanish and Latin but have been mumbling to your cat in fluent gaga? Well, in a recent Travelodge study, award-winning futurologist Ian Pearson has predicted that by the year of 2030, if we get past the apocalyptic end that is 2012 that is, hotel rooms will be able to offer all of this to us… in our sleep.
It only seems like yesterday that I was in awe of my Nokia 3310 which back then epitomised the latest technological advancement.
Being able to be mobile in playing the built in game Snake was revolutionary after a lifetime of playing Pacman and Space Invaders on my Grandma’s cardboard box-type computer. My envisions of the future were limited to ideas of a phone where it was possible to save 20 messages rather than 10 in my inbox or a camera where the flash was instant and didn’t make a buzzing sound for the 10 seconds it took to load. However such are our expectations as a society now that the idea of a phone which is able to translate a language through its camera function or instant internet where you can actually use the telephone at the same time, only gets a ‘mild firework display’ reception; there may be a few ‘ooo’s and ‘aaa’s but generally, we look forward to bigger and better.

With that in mind, there is something terribly exciting yet also terribly frightening about the technology being advanced right now as outlined in the Future of Sleep study. In one sense, the study serves as a reminder of how far our society has come in terms of technology.
It is the intention that this new technology will bring hotel rooms to life as it assists our brain in creating an augmented reality which is set to revolutionise how we sleep. Our dreaming will become interactive, we will have the option of making sex virtual, we will be able to study a different language or specific topic in our slumber, indulge in a shared dream experience by linking with friends and family and our health will be monitored to ensure that our emotions and energy levels are optimal to ensure a good night’s kip. Fancy having a room that acts as a fitness trainer, lifestyle coach and doctor combined? I don’t think I’d ever set foot outside again.
The idea of this technology is a reflection of the film Inception, without all the death and Leonardo DiCaprio, in which we will be able to choose and control the content of our dreams. Not in the mood for a comedy tonight? Simply choose to replay that action dream you had last week. It will be as easy as choosing a film on a plane.
This futuristic dream management system will also allow for individuals to connect with a partner who could be thousands of miles away. Long distance relationships will become a thing of the past. Enhanced virtual love making will be made possible through linking peripheral nervous systems via active skin electronics which will permit you to experience your partner’s feelings and emotions. An impressive concept but one I feel could result in trouble for distracted minds. And, if you ever decide to put on your beer goggles after a few Cosmopolitans and then manage to lose them on the sobering journey home when you’re with a date that you wouldn’t normally pitch for, do not fear. By wearing active lenses, the messages sent to your retina can be altered which in turn alters the appearance of your date. How drastic the change would be, I’m not too sure. I’m not completely confident that you would be able to get a Brad Pitt from a Michael Cera.
These active lenses will also allow sleepers to watch movies or check emails as they fall asleep by wearing the lenses under the eyelids so that they deliver high quality 3D images directly onto the retina.
It seems a waste to find out we spend a third of our lives asleep so why not let this new technology enhance this time we spend unconscious by creating the perfect dreamscape. Our senses will be continually tested as the technology will allow for entire surfaces and walls of the hotel to become the replica of your bedroom at home or your favourite beach in by the simple uploading of a photo. The atmospheric temperature control air conditioning and soft surfaces such as your sheets and pillow will interact in tactile ways to produce the climate of your virtual surroundings whilst also producing scents, changing colours and picking up signals from the skin. Outdoor sounds from flat panel audio built into the windows will soothe you with familiar noises or the clash of the sea hitting the sand. And why not use this augmented reality to see what your living room at home would look like in pink without that 'confirmation of masculinity' that is your other half’s unsightly eagle sculpture that he insists displaying on the centre of the mantelpiece?
When it’s raining in the summer, experience the transformation of your room into a theatre production, local tourist attraction or shopping mall. Girls, electronic mirrors will be able to offer you 360 degree views and the opportunity to try on virtual make up looks and hair styles before application.
Ok, 2030 is a while off yet but it is an exciting prospect that in just 19 years time we could be faced with all this technology and more. Invisibility cloaks, robot servants, hoverboards could transform from myth to reality and according to Back To The Future Part II, we only have four more years to wait until we get flying cars.
on Thursday, June 23, 2011