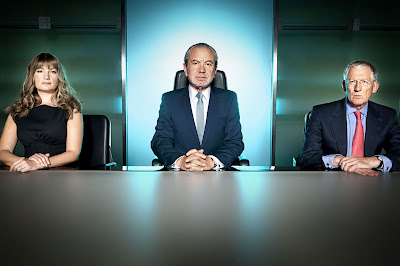 Well that was a bit of a shock. One of our favourites to win, Liz, has been banished from the boardroom by Lord Sugar. With the tough interview episode ahead, we are left wondering how our remaining favourite, Stella, will fare.

Their task for the episode London Tours was to try and sell tickets for their tour buses and walking tours. With egotistical Stuart as project manager, we didn’t hold out much hope for the team Apollo although Synergy’s deal with the London Visitors Centre to give them 20 % of all their revenue in exchange for promotion left us wondering how much profit they would actually make.

Alas Synergy's forfeit paid off and they took the win with almost 25% more profit. With both Stella and Liz blaming Stuart for their team’s failure it seemed that Stuart may have been for the chop.

However, Stuart’s ‘Baggisms’ about rooms full of knives and fields full of ponies seemed effective in securing a place for himself in the next round whereas Liz and her past four consecutive losses received the finger, of the firing kind, from Lord Sugar.

The Apprentice’s penultimate episode ‘Interviews’ is set to be fiery with Margaret Mountford making a come back to grill the remaining contestants and with not one or two, but three contenders being fired by Lord Sugar before the final next week.

Flick on over to BBC1 at 9pm tomorrow to see which three stumble in their interviews. Our money is on Stuart, please, Jamie and Joanna to go. Which three do you predict to get fired tomorrow?
on Tuesday, December 14, 2010

Stuart reminds me of David Brent

To me Jamie's favourite now. Stella could do it - but we're still waiting for a bit of flare.

Sugar now regrets sacking Liz for Stuart. About time too!!

Can he bring Liz back for the final?

A correct prediction by me. I Should have put some money on it!