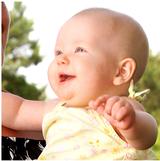 Kate Richards
Now, at 13 weeks, Ben's sleeping pretty well at night - for about two stretches of four hours each. We're even managing to have a proper evening because he seems happy to go down at 7pm, what a relief!

He's also starting to look like a little boy, and is much
more aware of his surroundings. He'll even get distracted in the middle of a feed, and try to stay awake when he's tired by staring at lights. But it's quite obvious that it is nighttime or naptime, when he yawns and rubs his eyes.
Sadly we're still having no luck with Ben drinking from a bottle, so no breaks from the night feeds for me. We've started trying a small cup, spoon, you name it! In this respect, he's different from all the other "antenatal" babies I know, who are more than happy with a bottle of expressed breastmilk or formula.

The antenatal group is continuing to meet up at least once a week, which is a great support. It particularly shows how different babies of the same age can be, yet some general patterns have emerged.

Of the group, Ben has the least hair - it's nothing to worry about but I am very curious to know what colour it'll eventually be. This means that his cradle cap is visible.

Cradle cap is a very common skin condition on the top of the head, which looks a bit crusty. It does not bother the baby and is safe unless it turns red and irritated or starts spreading. It can persist into the toddler stage, so it's a good idea to treat it regularly. Most people advise applying olive or baby oil, then brushing after a few hours, but it might need treatment as a fungal infection.

Something to ask at Ben's next NHS weighing session I guess!
on Thursday, December 23, 2010