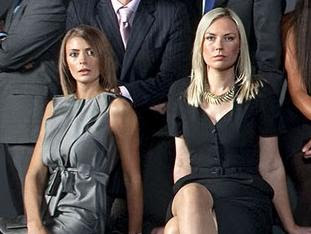 Last week’s explosive episode of The Apprentice which was reminiscent of the first episode of boy v girl kept us on the edge of our seats when it came to the boardroom. Our favourite two contestants were at risk of being on the receiving end of the all-powerful firing finger of Lord Sugar. Thank goodness it was Laura no-Moore that was sent home.

The battle of the sexes episode ‘Discount Buying’ certainly seemed to enforce the stereotypical gender behaviours associated with male and females. The men took on the ‘wing-it’ approach, unorganised but with their keen eyes on their targets whereas the women were organised, methodically planned and then moaned about one another in the boardroom.

Ultimately, it was only due to Apollo members Liz and Stella’s past performances that Lord Sugar felt inclined to give them another chance whilst he decided that after nine weeks, Laura had used up her nine lives.

Tonight’s episode ‘London Tours’ is sure to be entertaining with Liz, Stella and The Brand teaming together to try and sell Cockney style tours to London tourists.

Can Liz or Stella afford to lose again when Lord Sugar seems to have a soft spot for Stuart and his poor jokes? Do Liz and Stella deserve to stay after last week’s episode where Liz was said to have bad managerial skills and Stella was described as being too corporate?

Watch tonight at 9pm on BBC 1 to find out who Lord Sugar will get bored of being in his boardroom.
on Wednesday, December 08, 2010

Liz and Stella together again tonight - with your favourite contestant Stuart, Stacey.

Jo and Jamie looking bad ... so they're bound to win

You're so right, Clare

Two to go? How many episodes to do they need?

He can't keep this going for another ten minutes?

That's a mega-mega-shock. She was the favourite on the poll here.

Time for a new poll, Stacey

The favourite falls. Worse than the Grand National

Lots of support for her on Fired!