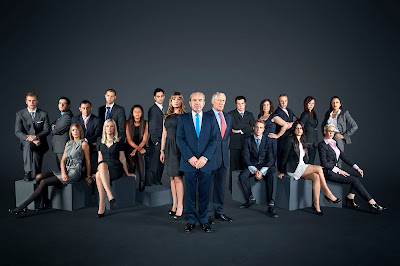 Attention… Apprentice spoiler alert. With the final going out this past Sunday, you may or may not be glad that The Apprentice has come to a close for another year and we’re now contemplating a Mystic Meg-esque job as our favourite to win was bestowed with the ultimate title of ‘The Apprentice’.

Winner Stella English maintained her cool, apparently wooden, composure as she faced Lord Sugar’s four tough interviewers whilst the other four contestants seemed to flounder, sweat and desperately grasp for the right words in an attempt to cover half-truths that were exposed.

Our glee at Wednesday’s ‘Interview’ episode was not just a direct effect of Stella being awarded a place in the final but because smarmy Stuart Baggs was knocked down a peg or two by Margaret, or Mrs Mountford to Stuart, and the other interviewers. Whether it was his obsession with animals, this time with silicon chipped cats in Bermuda and big fishes, his lies about his telecommunications company or his aim to become Lord Sugar’s business partner (and then probably onto world domination), Stuart was first to leave the fantastic final five.

Needless to say, Joanna’s failure to know the details of Lord Sugar’s business empire and Jamie’s hilarious jokes about third nipple’s meant that they were both fired rather than hired.

It was Chris Bates that accompanied Stella into the final where Lord Sugar asked them to create, brand, and present alcohol that would appeal to both men and women over the age of 25.

Whilst both brands Prism, a three ingredient pomegranate rum by team Chris, and Urbon, a honey and spices bourbon by Stella’s team, didn’t fail to impress, it was experience that conquered and consequently Stella was hired. A worthy winner in our eyes.

And so here marks the end of The Apprentice articles for this year. It’s certainly been an eventful series with a colourful cast of contestants who have provided hours of entertainment. The person responsible for the hiring of contestants for The Apprentice should be rewarded with a pay rise.