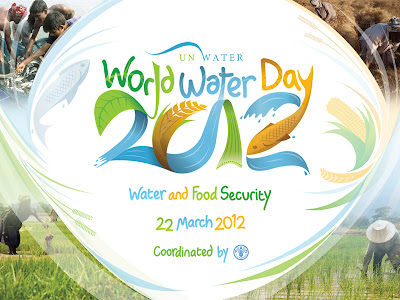 Stacey Collins
As journalists, activists and celebrity Twitterers spread the message that it was World Water Day on Thursday 22nd March, it was easy to dismiss the message as irrelevant. Surely, the day would have only been significant for the 1 billion people worldwide that live in chronic hunger partly because of the lack of clean water for themselves, their crops, livestock and livelihood.

Statistics show that each of us drink from 2 to 4 litres of water every single day. If you’re adamant that you don’t drink that much water per day, you may be surprised to hear that water is also embedded in food and so you may be eating it. A kilo of beef, for example, holds 15,000 litres of water. Still think that World Water Day doesn’t affect you?

As part of a Detox campaign, Greenpeace activists and volunteers plastered posters which we covered in non-toxic ink by rivers, shopping centres and other guerrilla locations in cities around the world including Stockholm, Bangkok, Madrid and Jakarta. After convincing names such as Nike, Adidas and H&M to eliminate hazardous chemicals from their supply chains and products, Greenpeace’s aim was to bring about an awareness of the brands which have not yet stopped their polluting practices such as Ralph Lauren and Calvin Klein. Shoppers were encouraged to wash off the water soluble paint on the posters to reveal a dirty little secret. Watch here to find out what the hidden message was.

Even though World Water Day has officially passed, it doesn’t mean that we can’t still be aware of our water footprint. We can take a series of actions to help sustain out clean supply of water including following a healthier, sustainable diet, consuming less water-intensive products and cutting down the 30 per cent of food wasted worldwide.

If you’re interested in finding out more or seeing what has happened post World Water Day, you can have a look on the official website by clicking here.
on Saturday, March 24, 2012