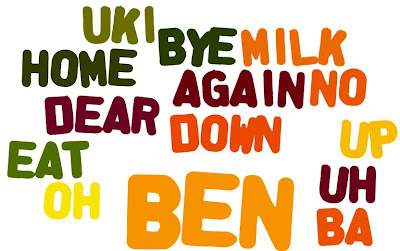 By Baby Blogger Kate Richards
Deciding when Ben spoke his first word is not as simple as I'd anticipated. Since he turned one year, three months ago, he's been saying "uh-oh" at appropriate moments. But whether this counts as a word is debatable.
Then a couple of months ago he started saying "ba ba" (bye bye) at the same time as waving. However, he'd do this at random times throughout the day, unrelated to anyone actually leaving. Now he does it about 30 seconds after the person has gone, and it's progressed to a proper "bye bye".

Things have been hotting up in the past week - he's regularly said "oh dear" either at times of minor disaster, or just when the mood takes him. I think this probably says a lot about my most-repeated phrase. Speaking of moods taking him, he will occasionally bring me the dvd of his favourite cartoon (Uki, from the Cbeebies programme Show Me Show Me), and will sing the first two notes of the theme tune, to make sure I get the point. He also sings it when he sees pictures of the Uki characters on his bedroom wall.

Excitingly, Ben has also finally started using a couple of sign language gestures: eat, and home. Glad the months of lessons haven't all been in vain. He will try to copy both new signs and words if I do them, but doesn't tend to remember them for the future.

He understands a lot more than he says, though. Definitely "no", although it doesn't always have the desired effect, and his name, and the words "again", "up", "down", "milk", and possibly more but it's hard to tell for certain.

Soon Ben will be 18 months and the experts promise he'll be learning words at a rate of ten or more a day. "So watch your language," I've been warned!
on Friday, January 06, 2012