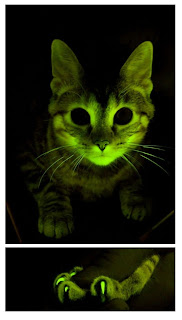 Stacey Collins
It’s not every day you find yourself thinking of as many famous sheep as possible. Wallace and Gromit’s Shaun the Sheep sprung to mind as did the ‘Baa Ram Ewe’ sheep from Babe but it is Dolly the sheep that holds particular resonance for this article on glowing cats.

Perhaps more odd than thinking about famous sheep is writing about these glowing cats that have been produced by US researcher Eric Poeschla. Three genetically modified cats have had a virus carry green fluorescent genes into the eggs from which they grew in a bid to help with the study of HIV. The gene has its origins in jellyfish and expressed proteins that fluoresce when illuminated with certain frequencies of light resulting in a glow in the dark animal.

For those of you concerned that the sight of glowing cats prowling around the streets at night could result in a nationwide alien furore, the researchers have said the use of genetically modified cats as a model for human diseases will be limited and only justified if other laboratory animals are not suitable.
More news about HIV research
on Wednesday, September 14, 2011