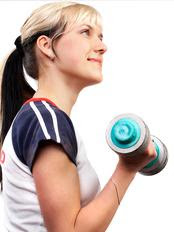 Stacey Collins
I remember watching a weight programme which featured a woman who was convinced that she was born to be overweight and that despite any amount of dieting or training at the gym, she could not lose the extra pounds that surrounded her stomach and thighs. She told the cameras that she had a bowl of fruit for breakfast and a healthy lunch and meal for tea and yet was still classed as clinically obese.

My confusion as to how someone with that healthy a diet could not lose weight was soon replaced with exasperation as they revealed her portion sizes. Yes the food choices she had made were healthy enough - but the amount she ate in a day would probably have been enough to keep a small family going for a week during the rationing of World War II.


This leads to that controversial debate as to whether the metabolic differences between thin and larger people are the cause or result of their body shape. You know, the thin and fat gene which some scorn as being mythical. For the dubious amongst you, you may want to reconsider.

In the early 70’s, a report was published by biochemist Douglas Coleman who said he had discovered the hormone leptin gene, a gene that plays a key role in regulating weight. Jeffrey Friedman continued this research by carrying out a study on inmates at Vermont state prison which involved getting the prisoners to double their usual intake of food. The study found that two of the inmates with a family history of obesity seemed genetically inclined to reach homeostasis at a higher weight than the other inmates that partook in the study. Even identical twins that are separated at birth have been found to have similar body mass indexes.

And it works both ways. A study by Imperial College London researchers has shown that extra genes can also make people thin. Extremely thin people, like larger people, can find themselves victims of prejudices and not-so-silent whispers as people automatically presume they have an eating disorder, but this study has found that duplicated genes found in around one in every 2,000 people can predispose their body to be extremely thin. An imbalance in duplicated parts of chromosomes of these people has the potential to make a male 23 times more likely to be very thin and females five times more likely.

I’m not going to try and answer the question is our body weight incontrovertibly fixed as I probably would be a multimillionaire if I knew the answer (and even better the cure). There is no doubt that there are several factors as to why people are the way they are but the corpulent people who are merely indolent and use the fat gene as an excuse for their laziness only serve to lessen favour for the thin and fat gene argument.
on Sunday, September 11, 2011