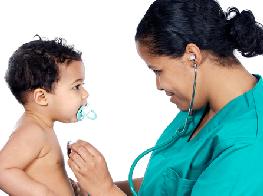 By Baby Blogger Kate Richards
Well it's a good thing we have so many towels. A few days ago Ben had what I assumed was a tummy bug. It started with a temperature and refusing food, developed into a few small vomits, and culminated in a really surprising volume of sick at bedtime.
Let's just say it was a two-person job to clean up.

Ben seemed fine immediately afterwards, but I wanted him checked over by a doctor. Being a Sunday evening, this was not the best time, but my GP's surgery connected me to a mysterious call centre which arranged an appointment at the local hospital.


Despite missing bedtime and being unexpectedly taken out in the car, Ben was as good as gold, keeping still while being examined and showing a polite interest in the doctor's equipment (possible future occupation?)


His temperature and heart rate were measured, his nose and mouth were examined, and we were asked about his symptoms, general health, and any current medication. The doctor pronounced him completely well and sent us home. The whole experience was very efficient and impressive, after a scary start. Ben was indeed fine from that moment on, and when I was ill the next day, I felt sure it was a tummy bug after all and not my cooking!


According to the NHS Choices website, it wasn't strictly necessary to have Ben checked out. It says to take your child to the GP if vomiting (or diarrhoea) lasts longer than 24 hours, or if you notice signs of dehydration, such as a sunken fontanelle (the soft bit on top of the head), the face and eyes look sunken or they aren't producing wet nappies.


The best treatment, it says, is to offer plenty of fluids, as well as bland, easily digested foods, and lots of reassurance.


Link: NHS Choices on having a sick baby