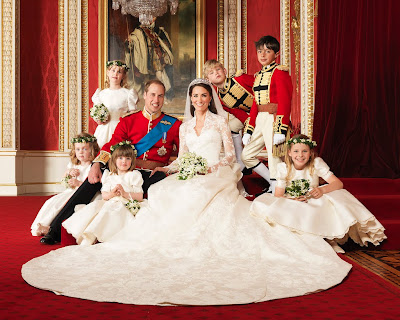 Stacey Collins
It was hard for Brits watching the Royal Wedding on Friday to not feel an ounce of patriotism as William and Katherine tied the knot in Westminster Abbey.

Even if you hid yourself away on the day of the wedding watching reruns of Friends on E4, the incredible lead up coverage and the reports following the special day of THAT dress, THAT flower girl Grace, who spent the majority of the balcony scene with her hands over her ears, and THAT hat that Princess Beatrice just should not have worn, it would have been an award worthy feat to completely ignore any coverage of the day.
For many it will be an event that people will remember where they were and what they were doing. To be involved personally in the celebrations at as the wedding and celebrations were streamed live on three big screens is an experience I shall definitely still be reliving in many years time. To sing our national anthem with 200,000 people whilst waving the Union Jack was a truly exhilarating and proud moment. At a time of political unrest, financial issues and job losses and cuts I felt very proud to be British (despite what unpatriotic, grumpy Birmingham Mail writer, Paul Fulford wrote ‘No it doesn’t, pal. Not by a long chalk’. Surely our nation should relish having something to celebrate?)
As far as the news of the death of Osama Bin Laden is concerned, it may have trumped the wedding aftermath by replacing the Royal Wedding headlines with news of sea burials and human shields, but it has also bought about an uneasiness of what is next to come. The Royal Wedding included none of that with the only negative feelings being those of withdrawal symptoms of royal gossip.
So as the BBC finally settle down and begin to report on other newsworthy stories and as the memorabilia starts getting moved from shop doorways to the bargain bin, we too also find ourselves settling back to normality. Whatever your feelings on the wedding, you cannot ignore the fact that it united a country that had been broken; it lifted the spirits of a downtrodden nation; and just as important, it bought about a £2bn boost to tourism.
on Wednesday, May 04, 2011