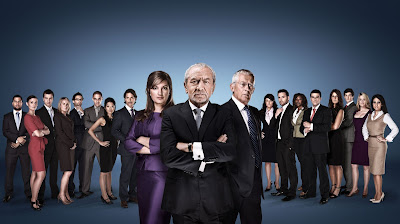 Stacey Collins
It’s only been five months since the last series concluded, but its back and set to be as entertaining as ever. That’s right, Lord Sugar is back on our screens in his search for a budding entrepreneur to become his business partner who will have the luxury of setting up a business of their choice with Lord Sugar’s expertise and a handy cash injection of £250,000.

The episode started off with the usual smarmy, egotistical, cliché comments that we have come to expect from candidates that have managed to either set up their own business at the age of 7 or, true Lord Sugar style, started with nothing and now own twenty houses and several Gucci suits.
For a show that doesn’t try and elude the fact it is more reputable for its entertainment rather than business factor, these opening candidate remarks have the audience thinking ‘What a pretentious, arrogant and conceited fool…Let’s watch more.’

And there is already an indication of where the friction lies between candidates, in particular between Edna Agbarha and everyone else, and who this series favourite - and favourite villain - will be.

It seems that last night's project manager, Melody Hossaini, who successfully brought her group Team Venture to a win by producing the profits on their fresh fruit and vegetables task, is already one of the favourites to win. She has previously been awarded the title of ‘Woman of the Future’ after her voluntary work, has apparently been mentored by the Dalai Lama, speaks five different languages, has survived a kidnapping and been held at gunpoint and we could go on. Runner up of the fifth series of The Apprentice, Kate Walsh, wrote on Twitter that she also thought that Melody sounded very impressive. Maybe she can talk the talk but can she walk the walk… we shall have to see on tonight’s episode.

And the villain of last night? That had to be screaming banshee Edward Hunter, who was pounced on by Lord Sugar in the boardroom and then ripped apart before being se

nt packing from the rest of the tribe. This secretive, ‘small’ and self-described ‘Wheeler Dealer’ was too busy escaping his accountant image that he forgot he was meant to be project manager on The Apprentice. He was so entertaining that it was sad to see him get fired.

To learn more about the candidates, and of course to make up your own minds, tune into BBC One at 9pm tonight to watch the episode Mobile Phone Application.