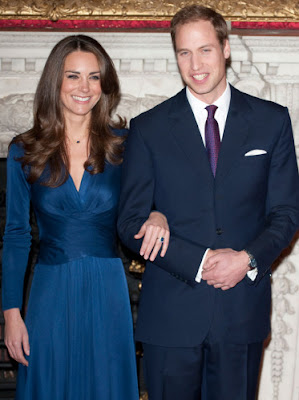 Stacey Collins
If you’re an anarchist, a member of the IRA or simply not interested in the Royal Wedding then I apologise now but we could hardly go this week without putting up an article on the special day - and here it is.

If I were asked to describe myself, Royalist probably wouldn’t be top of the list but there is a certain amount of excitement enfolded around the Royal Wedding that is hard to not get caught up in. Its prominence even makes a conversation about the colour, style and designer of Kate’s wedding dress with the check-out lady at Sainsbury's perfectly rational.


And, for some reason, it does seem to be the women that are avidly following the wedding furore. Whether it be women’s love for a fairytale romance and good wedding, the dress designer hype, or our repressed childhood feelings of ‘I want to be a princess’ being lived out through a seemingly deserved woman, it has been reported that 54% of the UK's women will watch the wedding compared to just 26% of men.
And this global phenomenon has of course unleashed a multitude of merchandise including this little beauty. Union Jack flags and Will and Kate posters have been placed appropriately in the foot of most shops; they’re not even trying to hide their intentions to capitalise on the monarch's wedding.

This prominent event that has seen almost 24/7 news coverage since the beginning of this week is expected to increase tourism by double, bringing an estimated 600,000 extra visitors to London and an extra £50 million on the day of the wedding through trade. Whilst it is reported that 16 million Brits will be celebrating the Royal Wedding, it will be televised to a global audience consisting of a mere two billion people.

Tipped to be one of the biggest events in TV broadcasting history, it comes as no surprise that the nation will spend an extra £480 million, an extra £29 spend per person in the UK, in preparation for the day on food and souvenirs. In fact, Kelkoo released figures that stated £76.5 million would be spent on alcohol, including half a million bottles of champagne. Now that’s one big party. And if you were of the opinion that the lavish Royal Wedding would be more costly than beneficial on our dwindling economy, surely this cash injection can only serve to burgeon our present flailing deficit nation.

So wherever you may be on April 29th, most likely indoors as rain has been forecast, why don’t you get out your flags, use your William and Kate plates, summon up some patriotic thoughts and drink one of the half a million bottles of champagne that have been bought to celebrate this historic British event.