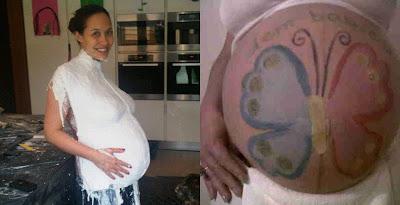 Stacey Collins
There's been a trend in the news this week and it's to do with pregnant celebrities -  in the form of Myleene Klass and Mariah Carey.

The topic of whether the baby bump is beautiful or beastly has been hotly debated for some time as some women prefer to be discrete and struggle to find garments large enough to hide their swelling stomachs and others dig away through the crop tops of their youth in a bid to reveal as much flesh as possible.

Celebrities such as Kate Hudson and Danielle Lloyd are not the only ones to have recently PDB (Publicly Display Bump) with Myleene Klass and Mariah Cary opting to celebrate their pregnancy by exhibiting pictures of themselves and their baby belly’s on Twitter for all to see.

Myleene Klass posted a picture of herself getting a ‘belly cast’ which consisted of her bump being smothered with plaster so that she can have a permanent mould to remember her pregnancy by. She later suggested adding tassels to her bump cast. Maybe she could use it as a light shade?

Mariah Carey decided to paint a butterfly on her stomach to celebrate not only the twins she is expecting but also to celebrate her 41st Birthday and her anniversary with husband, Nick Cannon. Call us cynical, but shouldn’t these photos be placed in the family album rather than a global one on Twitter?

As we hear about parents-to-be giving birth live on the internet, and now these celebrities showcasing their baby bumps via Twitter we wonder whether there is any privacy left in pregnancy and the beautiful act of childbirth or whether it will become the zeitgeist (with the ever-popular reality shows and our obsession with celebrity lives) where nothing is really private anymore.

And continuing with the theme in my last post of strange baby names, Myleene Klass has decided to call her baby girl, Hero. No comment needed.