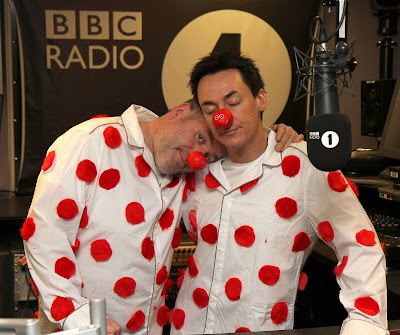 This time every year we are bombarded without fail of poignant videos, pictures of poverty and celebrity comedy as Comic Relief emotionally impact viewers in a bid to get us to part with our precious pounds. And who wouldn’t feel the African children pulling at their heartstrings after watching programmes such as Famous, Rich and in the slums? Probably not even Simon Cowell.

This year the celebrities have come out in charitable force with Vivienne Westwood designing Red Nose t-shirts which have been showcased by stars Sienna Miller and Ellie Goulding amongst others and celebrity trekkers including Dermot O’Leary and Olly Murs walking a gruelling 100 kilometres across the Kaisut Desert, northern Kenya in 118 degrees Fahrenheit temperatures.

But for some the scorpions, snakes, spiders and scorching heat do not compare to the sleep deprived radio presenters Chris Moyles and Dave Vitty’s attempt at a 51.5 hour non-stop radio show that commenced yesterday at 6.30 am. If you want to watch two men slowly losing their sanity for a good cause, the show is being covered live on the Radio One website. Word of warning, despite encouraging voyeurism as DJ’s begin to part with their clothes for money, this live video is highly addictive.

The collaboration between Twitter and EBay have singers, comedians and actors auctioning anything on EBay from a Twitter follow to set props including the Inbetweeners car. Never has a yellow and red 1994 Fiat Cinquecento been so sought after with the current selling price at £21,100 with three days left to go.

And of course it’s not just the shiny, sparkling celebrities that can raise the Comic Relief cash stash. Normal people like you and I have been battering sausages red, becoming superheroes for the day for parades and carrying out death-defying high-wire walks.

If you haven’t already done something for Comic Relief this year, tune in to the Comic Relief 2011 show on BBC One at 7 pm tomorrow and donate your weekend’s wine money or some of your allocated shopping spree funds. The show should be entertaining enough.
on Thursday, March 17, 2011