NO CHILDREN - NO WORRIES? 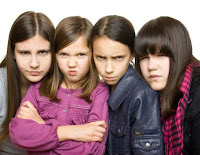 Kathryn Kearns
It's springtime, the animals begin to mate and you start to notice glowing, round-bellied women being cooed at by strangers and you wonder when that will be you. You long to start a family and to be running around after cute, troublesome little ones....Right?

No? Then please do not worry, a lot more women are now admitting that they don’t want children at all. As if it was a sin before, to want to focus on your career or other aspect of your life.

Women have admitted to feeling under pressure to have children and say they would get bemused looks of expecting mothers when they admitted to having no interest in children. They would try to find the reason why as if something was wrong with them. So where has this prejudice come from?

A long time ago it was unheard of for women to not want children, as this was what was expected. As we know times change, and lifestyles change, giving women more choice as to what to do with their lives, while
some women look forward to starting a family, others look forward to travelling and being successful in their chosen career, and what is wrong with that.

Cameron Diaz admits she’s happy to be childless. The actress told cosmopolitan magazine in Summer last year that she too, thinks being a woman and saying you don’t want children is taboo and women are afraid
to say this for fear of being shunned, she said “there are a lot of people on this planet. Do we really need any more?”

Diaz, who is only a couple of years off 40 didn't go as far as to say that she definitely does not want children. But to be openly, undecided on the issue as a thirty-something woman, when her all important biological clock
is ticking away, is very brave. She also went on to say that a lot of her friends who are also her age are undecided or do not want children at all.

Wanting a child for many, is a desire that is partly triggered by society. It tends to project an idealised, highly commercial version of motherhood. So some women start to have babies because it is expected; because they want to hold on to a partner, end loneliness or even fight boredom. Do we really want that?

It seems a good thing the pattern and priorities of modern life have changed. Individualism and the selfish gene have flourished and women are empowered more than ever to make the right decision on something
that will effect there life in such a big way.

Statistics tell us that the birth rate in Europe is in steep decline. Currently 40% of UK University graduates aged 35 are childless and at least 30% will stay that way permanently. We know that much of this
childlessness is involuntary or, at least, unconsidered, the consequence of infertility, a lack of opportunity or leaving it too late, but some of it will be a personal decision, and seeing as though childlessness is going to be a
feature in many of our lives.

We need to start seeing it as a choice, a valid option, rather than a failing, and we most certainly need to stop making the voluntarily childless feel like they have something wrong with them.

Women’s rights came into play a long time ago so ladies do not be afraid to exercise your choice on the biggest decision of your life. If Cameron Diaz can be honest with the world then so can you.

They're not always like that! Sometimes you don't know you want them until you've got them - that's the problem.