THE EQUINOX - WHEN MOOD SWINGS UP? 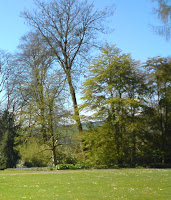 Stacey Collins
The rock band Death Cab for Cutie wrote about it, it happens once a year and it can have a direct effect on people’s moods, but what is the vernal equinox?

No, it's not the Queen’s Speech or the new title for the next Harry Potter instalment, but a posh way of saying ‘the first day of spring’.

The equinox is translated to ‘equal night’, when the day and night are of equal length - or as ‘Death Cab for Cutie’ explain in their song, Meet Me On The Equinox, when the sun is at its highest peak, in the middle of the day.

Whilst spring does not officially arrive until the 20th March this year, many people associate the beginning of March with the season of birth, bunnies (the Easter one of course) and the dreaded spring clean. It’s a time to start anew, to celebrate the noticeable lack of snow and to look forward to the summer ahead (discounting the last three summers obviously).

Without meaning to, we Brits do tend to fall into our preconceived stereotype of talking about the weather, like all the time. However, when something has that much of an effect on our emotions, surely it’s a subject that needs to be revisited over and over?

Why is it always on our minds? Does the majority of the United Kingdom suffer from the winter blues or Seasonal Affective Disorder (SAD)?

SAD is when people experience depressive symptoms during the winter. This may include sleeping problems such as oversleeping, a craving for those naughty carbs, and a loss of libido. Before those hypochondriacs amongst you go and diagnose yourselves with SAD, the Seasonal Affective Disorder Association estimate that just half a million people suffer from this disorder, particularly between September and April.

Whilst SAD affects both sexes, it has been proved that more women suffer from the disorder than men. It is thought that as many as 70-80% of cases occur in women.

It comes as no surprise that the winter months cause this depression. Whilst the spectacle of snow may have us entertained for a few days or so, it certainly outstayed its welcome this winter.

The dark nights force us to stay in and watch re-runs of the Gilmore Girls and wearing ten jumpers at one time leaves us physically unable to move.


Well spring time is unofficially here. The sun has decided to make an appearance; the trees are beginning to replenish their leaf supply and its getting lighter by a whole two minutes every night.

Before we know we’ll be smothering ourselves in factor 60, overindulging in ice cream and of course, in true Brit fashion, moaning that it is too hot.
on Saturday, March 06, 2010