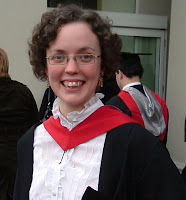 Miriam Gent may represent the doctor of the future. For Miriam is a medical student who's taking a degree that is a little different.

At a time when women are conquering the once male-dominated world of medicine, Miriam has seized the chance to add some culture to medical training - and what a difference it's made!

Miriam, a student at Leicester University, UK, was part way through her medical degree when she took a year out.

During that year she studied "humanities - that is art, literature and music. And now she has acquired the first ever MA in Medical Humanities.

Now if you think that was a "year off", you'd be wrong. For Miriam's experience during the year deeply moved her and led to her making decisions about the kind of doctor she is going to be.

The first thing she did for her MA was not to spend time in the library or the theatre but in the troubled African country of Rwanda.

There she studied the aftermath of the genocide, when thousands were killed because of their race. She read carefully what people had written about this most traumatic of times, seeking to understand the impact.

And her discoveries radically changed her approach to her medical career.

She's now returned to studying medicine. But she has decided to specialise in psychiatry, working with children and families and asylum seekers, hoping to help them overcome the trauma of their lives.

Miriam says her time spent in the arts challenged her "scientific comfort zone".

She says: "I am more self-conscious about the way I perceive, and am perceived by, our patients."

And if you want to know how medicine has changed since Elizabeth Garrett Anderson broke through male domination to become the first woman doctor in 1865 check out these figures.

In 2008, girls beginning their training as doctors outnumbered boys by a full 1,000. That was 4,500 female medical students starting courses - compared with 3,500 males.

And if anyone represents this new generation of women doctors - it's Miriam!
on Monday, February 01, 2010