The Apprentice final... minus the apprentice 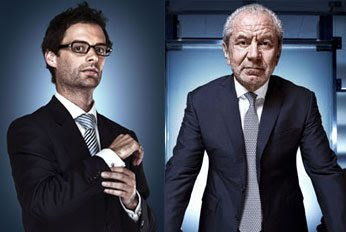 Stacey Collins
I believe a congratulations is in order to Tom Pellereau for winning The Apprentice for geeks, mathematicians and inventors alike. Perhaps Helen was too obvious a winner throughout the whole process to actually win it and as Lord Sugar said, if it were the old system, Helen would have walked it.

And so thus endeth The Apprentice for another year and true to old style school lessons, it remains for us to see what we have learnt from the process:

1) Tom is actually a robot. The flickering eyes, the repetitive head nodding and his systematic way of churning idea after idea all support this speculation.

2) Helen should have applied a year earlier for the previous apprentice format (she also scrubs up very nicely).

4) Women should stay away from Jedi Jim unless they want to be charmed into buying umbrellas from him, practically giving stock away for free and giving him a hug.

5) Lord Sugar started his business when he was a very young chap don’t cha know?

As much as I enjoyed the new apprentice format, the final episode did feel rather lacking in comparison to previous years. There was always a sense of excitement when ex-contestants who you had completely forgotten were ever in the process were rehired for the final episode to help the finalists with their last task and pitch. After the final task, as an audience you felt that the crowned finalist fully deserved the apprentice title as the entirety of the concluding assignment was their sole responsibility. That means not wilfully and rather gratefully allowing Helen the title of Project Manager every week, Tom.

Sure, the new Dragons Den-esque format had the remaining contestants face the terrifying interview stage which was a feat deserved of the apprentice title in itself but somehow the interviewers managed to extract much of the life and enthusiasm out of the contestants as they found potholes and flaws in their business plans leaving the pessimistic finalists with little passion for their ideas. Heck, Helen even decided to change her idea.

And was this format not flawed from episode one anyway? Was there any point in setting tasks if someone who impressively won 10 out of 11 tasks lost to someone who lost nearly as many? If it were business plans they were looking for, what if someone who had been fired for something menial before had a great idea? The final four plans presented to Lord Sugar certainly left a lot to be desired.

Whether this format will be used again for next years’ series I have no idea but as entertaining as Series 7 has been, I’m hoping the idea will become a has-been and that the old system will be restored where The Apprentice, actually produces an apprentice.
on Tuesday, July 19, 2011