New Diet Coke design, but will the price make you bottle out of buying it? 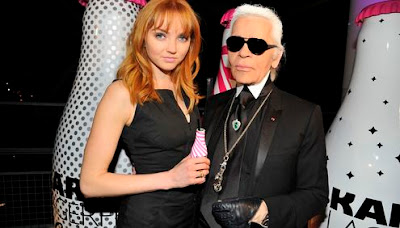 Stacey Collins
Never thought you could afford anything designed by Chanel’s creative director, Karl Lagerfeld? Well the man with the infamous silhouette has taken time out of his collaboration with ex-editor of Vogue Paris, Carine Roitfeld, on the Chanel autumn/winter 2011 campaign and designed three stylish limited edition bottles for Diet Coke.

Previously, designers Matthew Williamson, Gianfranco Ferre and Robert Cavalli have all taken their turn in adorning the Coke bottle as well as Karl Lagerfeld who designed his first coke bottle last year in 2010. This collaboration seems rather apt considering that Karl Lagerfeld is renowned for just drinking diet coke.

In fact, it was reported that the Karl Lagerfeld lost 90 pounds after only drinking diet coke and eating steamed vegetables for 13 months. The once overweight designer even has his own diet book although we’re not sure that he needed a whole book to tell you 100 different ways of plating up stewed spinach with Diet Coke.

The fashion designer celebrated the launch of his designs in Paris with supermodel Lily Cole stating that his bottle designs encapsulated a ‘lighter approach to fashion’. Each of the Diet Coke bottles labelled 1, 2 and 3 were meant to capture the fun and frivolous personalities of the Diet Coke girls.

So will you be splashing out on a designer bottle that will have collectors desperately queuing at their local corner shop or will you just stick to the traditional clear bottles for a fraction of the cost? If you were creative enough, you could get your money’s worth by attaching the bottle to a key ring or even a headband, Lady Gaga style.
on Tuesday, April 12, 2011

How much is it?

I'm not too sure on the price but I heard the bottles he designed before were about $5 so I guess that translates to about £3.50ish?

That design looks really good. The price doesn't matter. It's what's inside it. Thanks for sharing.