Cruel to be kind - ouch! 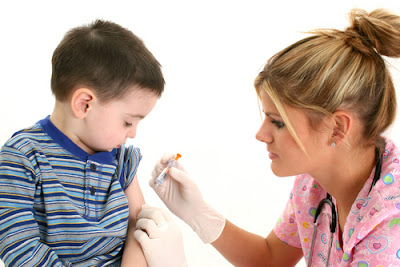 Kate Richards
Recently I've had to take Ben for three sets of immunisations, poor thing. The first time I made the mistake of watching the reaction on his little face, but I soon learned to look away at the crucial moment.

The nurse warned me about the potential side-effects: pain, redness and swelling where the needle went in, a slight fever for up to ten days, and irritability. Luckily Ben didn't seem to have a reaction to any of the jabs, except being a bit more grizzly for a few hours after the first one. I bought some Calpol (baby paracetamol) just in case he developed a temperature,  but didn't need to use it.

Phew, I'm glad it's over for another eight months! At about a year old he'll have haemophilus influenzae type b and meningitis C again, plus the infamous MMR (measles, mumps and rubella), which I have no concerns about at all.

The MMR vaccine has been in the news off and on since 1998, when a research paper linked it to autism and bowel disorders. Many parents decided not to give their babies the vaccine, but experts never really accepted the risks and it was still recommended. Just recently the research has been deemed "dishonest and fraudulent" by top doctors. No other studies have ever evidence of these risks.

I feel lucky that a system is in place, and free in the UK, to protect Ben against serious diseases that could cause long-term health problems or even be fatal.