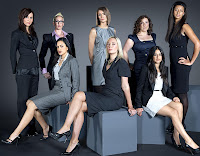 Stacey Collins
The fight to resist Orange 241 films on a Wednesday has just become easier as The Apprentice has made its sweet return for the sixth series with Lord Sugar.

As we wait in anticipation for tonight’s episode, when we shall see who ‘dough’ and who ‘doughsn’t’ get through on the bakery challenge, last weeks ‘bitchfest’ episode is still fresh on people’s minds.
Episode two of The Apprentice saw the two teams have to design, create, pitch and then sell a brand new beach accessory. Team Synergy were led by city banker, Stella English, who whipped her all-male candidates into shape and led them to a win with their ‘Cüüli’ beach towel premise.

The win for Synergy should have given pro-women viewers a cause for celebration, despite the beach-attire incident, as Stella conducted her team in a ‘cüül’ and professional manner to victory.

This fe-positivity was overshadowed however by the group Apollo who certainly made an apocalyptic mess of their idea ‘Book-eeze’. Their product was intended to provide beach-goers with a comfortable way of reading whilst at the seaside. If only they could have turned to the last page and seen that their product didn’t have that fairy-tale ending.

Business Development Manager, Laura Moore, aged 22, took the role of Project Manager after boasting that she had single-handedly made half a million pounds in profit in her first year as a management consultant.

Unfortunately for her, ‘Book-eeze’ failed to even make one pound with no sales after Laura turned down an opportunity of exclusivity with leading retailer Boots.

This failure led to havoc in the board room as the female contestants lashed out at one another, refusing to accept any of the blame.

Lord Sugar’s female advisor Karren Brady, let the women know in no uncertain terms how unimpressed she was with their behaviour telling them that they were meant to be representing business women today.

So can these women really fairly represent the business women of today or is this a case of ‘I’m on TV-ego’?

Watch this week’s episode of The Apprentice on BBC 1 at 9pm tonight to see whether the women rise to the bakery challenge or whether they end up going stale.
on Wednesday, October 20, 2010

Email ThisBlogThis!Share to TwitterShare to FacebookShare to Pinterest
See more on: business, stacey collins, The Apprentice

Well done Stella. A businesswoman to watch! Karren should have praised her up ...

What happened tonight? Did anyone see?

I was impressed with Stella also- did anyone catch how she did last night?

It's not on BBC iPlayer - only You're Fired. Is it on YouTube?

Was Stella there last week?!