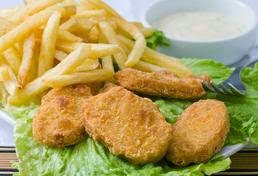 I read with interest the new advice for pregnant women released by the Royal College of Obstetricians and Gynaecologists. It covers healthy eating, supplements, and how to avoid contaminated food in pregnancy.

The leaflet repeats all the usual standard dietary advice - low fat, high grain - some of which is being questioned in recent studies, and also recommends limiting caffeine to 200 milligrams a day, about two mugs of instant coffee.

It also states that "most women do not need any extra calories during the first six months of pregnancy".

Well I'm sure that's true but when faced with an urgent craving for smoky bacon crisps (as in my case), the official advice can get slightly sidelined!

Eating fish is good, but too much oily fish can risk a high intake of mercury which may affect the baby's development. Shark, swordfish and marlin are out altogether, for this reason. No great loss there then.

Liver and liver pate are also ruled out, which I think is a little extreme. However, they are rich in vitamin A, which in high doses can harm the baby's nervous system.

Peanuts can be eaten freely, as the earlier advice to avoid them in order to prevent an allergy has been discredited.

On the unpleasant topic of food poisoning, the advice is to drink only pasteurised milk, avoid ripened soft cheese -
such as brie, raw eggs and raw shellfish, and cook food thoroughly. The normal food hygiene rules such as hand washing are obviously important.

Folic acid tablets (400 micrograms a day) are recommended to cut the risk of spina bifida, and vitamin D (10 micrograms) is now recommended for all pregnant and breastfeeding women.

The leaflet is a good summary of the current official advice, and may put some of the many myths in this area to rest.