Ben has his preschool shots 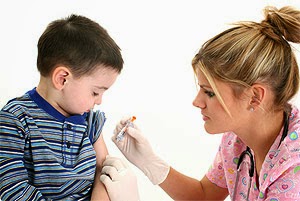 Being nearly three and a half, Ben was recently subjected to his second, and final, dose of the measles, mumps and rubella (MMR) vaccine, along with another injection combining diphtheria, tetanus, whooping cough and polio. It was not a fun morning!

The last time he had an injection of any kind was ages ago, when he was 12 months old. He's since had a flu vaccine, but that was a spray up the nose, which he was fine with.

This time, two nurses had to hold him down and stick the needles in simultaneously in both upper arms. Although distressing for him, it was at least over quickly, then he was plied with chocolate biscuits for the shock.

I feel very grateful to have access to preventative medicine like this. Measles, mumps and rubella are all highly infectious and can have serious, even fatal, complications. I didn't receive the MMR vaccine as it was introduced in 1988. But since then, it's become rare for children in the UK to catch these diseases. Although outbreaks can happen, sometimes at random and sometimes after side-effect "scares" such as the link to autism made in the 1998 paper by Dr Andrew Wakefield, whose claims have now been fully discredited.
However, the vaccine does contain weakened versions of live measles, mumps and rubella viruses, so the nurse reeled off a list of possible short term side-effects, including mild forms of measles or mumps, or small rashes. Due to the three separate vaccines in the injection, side-effects can occur at different times up to three weeks afterwards.

Ben seems to have escaped all of these symptoms, not even needing Calpol (child paracetamol) for a raised temperature. That's not to say he's given me an easy ride lately - details to follow next time!