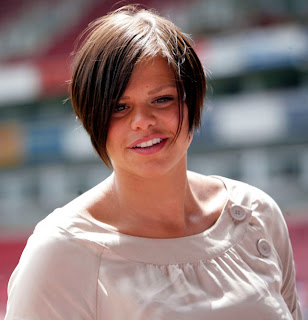 Laura Johnson
Well it's been rumbling away in the background. If you were wondering whether to let your daughter have the new HPV vaccine you might not have known about it.

This was the question of whether the vaccine used in the UK was the best one.

The campaign to vaccinate against cervical cancer has been radical - and even a little controversial.

For a start it's targeted at girls in their early teens. Why? Yes, it's because it catches them before they get sexually active - because that's a good way to get the virus which, it seems, has been responsible for the dreadful toll of cervical cancer over the years, taking the lives of the likes of TV reality star Jade Goody.

In some prurient countries that's made it a no-no. But we Brits are mostly not prudes - so it's been pretty successful here.

And now it's to be improved - and that should help prevent a fair amount of female misery.

From the start, critics said the British government was using the wrong vaccine. It seems government advisers have now agreed.

A new vaccine Gardasil, to be introduced next year, will protect against an extended range of viruses.
It is hoped it will cut cervical cancer rates by 70 per cent - protecting against the two commonest viral causes of the disease. And it is expected to cut the rate of genital warts by 90 per cent.

The president of the Royal College of Obstetricians and Gynaecologists, Dr Tony Falconer, said he was "delighted" at the news.

He said: "Not only will it provide immunity against cervical cancer caused by HPV, it will also protect against the strains of HPV that cause genital warts, which are unpleasant and the cause of much psychological distress for sufferers."

The government director of immunisation Professor David Salisbury said: “Young women and girls who have already been vaccinated or who are due to be vaccinated before September, do not need to be vaccinated again. They have done exactly the right thing and they can be assured that they are protected against types of HPV virus that cause over 70 per cent of cervical cancer.

“We have one of the best HPV vaccination programmes in the world and we want that success to continue. It will be tremendous to see rates of cervical cancer falling. The number of women getting abnormal results from HPV screening will also fall.

"Many women will no longer have to live through the worry and stress of follow-up after screening, including treatment for precancerous lesions.”

The number of women getting test results within a fortnight has nearly double in the last year, according to the NHS Information Centre, and now stands at 83 per cent of those who are tested. A year earlier it was 45 per cent.