DO DADS GET DONE DOWN? 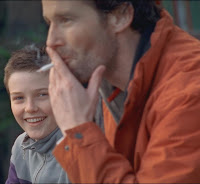 Dads are getting a raw deal, everybody was saying yesterday.

Life's so tough for new fathers that they are to get an official guide from the British government - the Dad's Guide.

There'll be further guides for midwives to make sure they don't neglect the anxious father.

Well, we know men aren't hard-wired to hang around during birth - and they'd love not to be around for nappy-changing. But most get it eventually, don't they?

We know what this is about - the poor modern father is so disengaged that he won't hang around and won't commit to is family. So will the Dad's Guide do the trick? Or are we better off without idiots who don't see the point of a loving home?

Email ThisBlogThis!Share to TwitterShare to FacebookShare to Pinterest
See more on: fathers