The impact of babies on my sleep 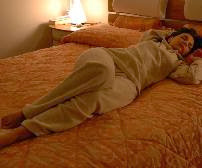 By Baby Blogger Kate Richards
Before having babies I was aware that my sleep would definitely be interrupted for the first few months, and then occasionally when the baby/child was ill or had a bad dream. It was a daunting thought but I assumed I'd get through it like other parents do.


I'm glad I didn't know what the reality was going to be for me. I actually think it would've scared me off parenthood altogether.

Things were fine for the first six weeks of Ben's life. He slept in a cot next to me and woke often for a feed, as expected from a newborn, especially a breastfed one. I fed him and fell asleep easily. But things gradually began to change. The rare occasions I couldn't drop off became more frequent until it happened every night. Sometimes I would only get two or three hours' sleep, and stumbled around the baby groups like a zombie, forgetting everyone's names.

We moved Ben to his own room and eventually he started sleeping through the night, but things didn't improve for me. I tried everything, including hypnotherapy. After a lot of soul searching I decided it was due to anxiety and tried to relax more, but to no avail.

However, after nearly three years, things are definitely looking up. I discovered a fantastic book by a woman who suffered insomnia for 15 years. That made me trust her immediately! She recovered after realising there was nothing intrinsically wrong with her, but crucially, that sleeping problem are perpetuated mainly by a fear of not sleeping.

Following her suggestions I've changed my attitude - from feeling panicky at bedtime to feeling much calmer. I'm sleeping better, and staying calm on the rare nights when I do lie there awake. I've been recommending the book as much as possible ever since!