I become a Mum of two 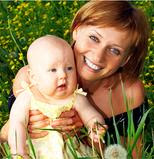 By Baby Blogger Kate Richards
Life has been pretty crazy this past 12 weeks! Having two small children certainly doesn't leave much chance for reflection. I could write pages and pages, if I only had the time (and energy). But for now, I'll just concentrate on the birth.

As I mentioned before, baby James was breech (head up) towards the end of pregnancy, so a caesarean was booked. This had the advantage that we could plan childcare for Ben, and the even bigger advantage of no contractions! It's not what I would have chosen, but I'm not disappointed.

We had to arrive at the hospital very early, but then waited for seven hours - I was put at the bottom of the list for having the fewest risk factors. I fluctuated between bored and scared, until finally we were called to theatre. What a strange experience! The room was brightly lit and full of people. I took my position centre stage and had to keep perfectly still for the spinal block to be placed in exactly the right place.

Within seconds (according to my hazy memory) I became unable to move from the waist down, so needed help to lie flat. The curtain was raised, and one of the various medical staff sprayed my body with freezing air from a can to check I couldn't feel it. Very odd. Although I couldn't feel what they were doing, or even tell what position my legs were in, I had a heavy, warm sensation (which lasted several hours).

Within about five minutes the baby was out! He looked ready to be born, fairly large at 8lb 6oz, much bigger than Ben had been. After the routine checks, he was handed to my husband and I managed a little kiss on his nose.

The hard bit was the post-natal recovery, which I'll describe next time.
on Monday, February 04, 2013