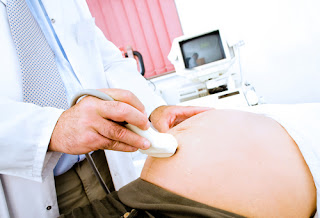 By Baby Blogger Kate Richards
This pregnancy has just taken a turn for the unexpected! At a routine appointment, the midwife wasn't able to tell what position the baby was lying in, so referred me to hospital for a scan. And thank goodness she did, because it revealed that he is in fact breech (head up), and therefore a normal birth would carry much higher risks.

What a surprise! He'd been in the right position a fortnight earlier, and by that point - around 36 weeks - they generally stay put. I spent hours reading up about breech babies, and saw a consultant the following day. She suggested a technique called "external cephalic version" to try to turn the baby head-down. I was given an injection to relax the womb, lay on a bed which was tilted so gravity could help (!) and the doctor tried her best to push him round. But apparently he's firmly wedged in, so no luck.

After that I was talked through the process of having a caesarean, which the hospital recommends for breech babies, agreed, and signed the consent form. It's booked for just four days before my due date, so there's a chance of labour starting before then! In that case, the doctors would decide whether to go straight to a caesarean, or if I've already progressed quite far, whether it's safer to have a vaginal breech birth.

I'm trying to look on the bright side - although the recovery from a caesarean is longer, it's more predictable in timing and risks than a normal birth would be. It'll be annoying not being able to do much for a while, but I'm determined to be lazy because I don't want to risk overdoing it and delaying the time when I'm back on my feet. Above all, I'm really looking forward to meeting our newest family member!
on Wednesday, November 07, 2012