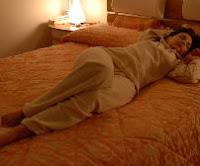 Kate Richards
After having a dream pregnancy until now, I'm starting to have a noticeable night-time niggle - sleep is no longer my friend. Some nights are ok, only waking once or twice for bathroom visits, but it's definitely going downhill.

I'm 30 and a half weeks pregnant with a fast-expanding bump so it's hardly surprising that getting comfortable at night is tricky.
I use a complicated arrangement of pillows which is fine for a while, but turning over takes a fair bit of effort and coordination. So much so, that I'm often too awake afterwards to drop off again. Added to which are the baby's movements. I don't know if I'm concentrating more or if he really is busier at night, but it can sometimes feel like my mid-section is being driven over a bumpy road while the rest of me is lying still.

As expected, I'm eating a lot more than usual, and hunger can even wake me up. Then if I do have a midnight snack, the baby gets an energy boost (this happens after every meal) and starts jumping around even more energetically. He's moving as I write this, as if to agree.

Luckily I'm already limiting my caffeine intake, so that won't exacerbate the situation. My mattress is very good, and I use excellent (silicon) earplugs and an eye mask due to living in the city centre. Having a bath before bed tends to help, too. But certain factors are outside of my control, and I get the feeling this might be a very warm summer, oh dear.

Being a light sleeper at the best of times, I suppose pregnancy sleep issues are only to be expected. And of course there'll be another major distraction in about ten weeks so maybe it's better to get used to interrupted sleep sooner than later.
on Thursday, July 08, 2010