WHAT'S WITH WOMEN AND CATS? 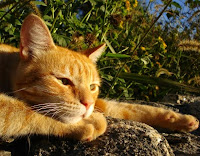 Stacey Collins
Would you describe yourself as young and female? If so, a recent report published in the Veterinary survey indicates that you are more likely to own a cat than older men and women.

Ever seen the film Cats and Dogs where cats ploy for world domination and attempt to make dogs meat of their canine fiends? Well a recent study proves that cats well and truly lost the battle - as it is estimated that dogs outnumber cats by 3 million in the UK.

1,278 households in a semi-rural community in Cheshire were surveyed and results concluded that there are around 7 million cats but 10 million dogs in Britain.

This result differs from other countries where the general trend is that cats outnumber dogs.

So why is it that cats are more likely to be linked with female owners?

Whilst it could be linked back to the Egyptian queen Cleopatra and her love of cats, it is hard to ignore the constant comparisons of women to felines. Ever heard women titled a 'sex kitten' or seen a fight between women classed as a cat-fight? And of course, who could forget Catwoman?


It is often joked that cats are a favourable companion than men because of their honesty, appreciation when it comes to meals and the fact that a cat will never come home drunk and disorderly (or if they do, it is usually something to do your other half having poured his beer into the cats water dish as a joke).

It is not a coincidence that it is dogs, and not cats, that are renowned for being ‘man's’ best friend.

Surprisingly, the study also showed that cat owners were considerably more likely to own a horse. However, as the study was carried out in Cheshire, there is no doubt that the area houses a few ‘aristocats’ that can afford the luxury of owning a horse.
Stacey Collins
on Saturday, April 10, 2010